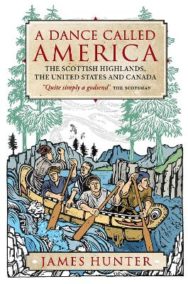 A Dance Called America: The Scottish Highlands, the United States and Canada

A dance was devised in eighteenth-century Skye. An exhilarating dance. A dance, a visitor reports, ‘the emigration from Skye has occasioned’. The visitor asks for the dance’s name. ‘They call it America,’ he’s told.In his introduction to this new edition of his classic and pioneering account of what happened to the thousands of people who left Skye and the wider north of Scotland to make new lives across the sea, historian James Hunter reflects on what led him to embark on travels and researches that took him across a continent.To Georgia, North Carolina and Montana; to Nova Scotia, Quebec, Ontario and the Mohawk Valley; to prairie farms and great cities; to the Rocky Mountains, British Columbia and Washington State. This is the story of the Highland impact on the New World. The story of how soldiers, explorers, guerrilla fighters, fur traders, lumberjacks, railway builders and settlers from Scotland’s glens and islands contributed so much to the USA and Canada. The story of how an oppressed people found in North America a land of liberation.

James Hunter is Emeritus Professor of History at the University of the Highlands and Islands. He has written extensively about the north of Scotland and about the region’s worldwide diaspora. In the course of a varied career Hunter has been, among other things, director of the Scottish Crofters Union, chairman of Highlands and Islands Enterprise and an award-winning journalist. His book Set Adrift upon the World (Birlinn 2016) was Saltire History Book of the Year in 2016.