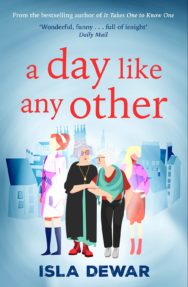 Home > Fiction from Scotland > A Day Like Any Other

You can’t change your past. You can only use the experiences you live through to make your future better, wiser. Anna and her best friend George meet every week to remember, to sigh, to laugh, to reminisce about their moments of glory, guilt and mischief and share their sorrows over a glass or three of wine. The things they’ve done still make them blush. Anna wanted to be a poet – a famous poet. George left home in a childish rage and years later returned with her baby.

When Anna is asked to look after the boy across the road for a few hours each week, she isn’t sure. She doesn’t really do children. But she takes the job on and, gradually, a child’s view of her world shows her a different place. George remembers a flat she stayed in when she ran away from home. It had the kitchen of all kitchens and, oh, how she’d love to see it again. Anna sets out to see if it still exists and discovers a cookbook full of recipes, intimates notes and drawings from George’s life. Does all this mark an ending or the beginning of something new and marvellous for Anna and George?

Isla Dewar’s first book, Keeping Up with Magda, was published in 1995. Dewar found success with her second novel, Women Talking Dirty, the film of which starred Helena Bonham Carter. She contributed to the collection Scottish Girls about Town and has also written for children. Her most recent novel, It Takes One to Know One, was published by Polygon in 2018. Born in Edinburgh, Isla lives in the East Neuk of Fife with her husband, political cartoonist Bob Dewar.