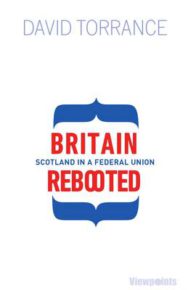 Great Britain, (abbreviation: UK) England, Wales and Scotland considered as a unit. The name is also often used loosely to refer to the United Kingdom.reboot, ri-bu:t , verb to restart or revive… give fresh impetus to…federal, fed ar-al, adj. having or relating to a system of government in which several states form a unity but remain independent in internal affairs.Would federalism work in the UK?Wouldn’t England dominate a British federation?How would powers be distributed between federal and home Nation level?What about the House of Lords?In the run up to the historic referendum on Scottish independence there has been a plethora of tracts, articles and books arguing for and against, but there remains a gap in the literature: the case for Scotland becoming part of a `rebooted’ federal Union. It is an old, usually Liberal, dream, but one still worth fighting for.It is often assumed that federalism is somehow `alien’ to the Scottish and British constitutional tradition but in this short book journalist David Torrance argues that not only has the UK already become a quasi-federal state but that formal federation is the best way of squaring the competing demands of Nationalists and Unionists.He also uses Scotland’s place within a federal UK to examine other potential reforms with a view to tackling ever-increasing inequality across the British Isles and create a more equal, successful and constitutionally coherent country.

David Torrance is a freelance writer, journalist and broadcaster who specialises in the politics and history of the long-running debate about Scottish independence. After being educated in Edinburgh, Aberdeen and Cardiff he worked as a newspaper and television reporter before taking a brief career break to dabble in politics at Westminster. For the past seven years he has been a freelance commentator as well as the author or editor of more than ten books about Scottish and UK politics, biography and history. Like all good Scotsmen he has lived in London for long stretches but is currently based in Edinburgh.