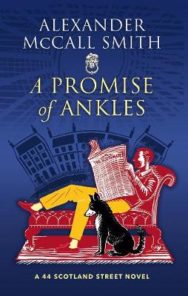 Home > Fiction from Scotland > A Promise of Ankles: A 44 Scotland Street Novel

A Promise of Ankles: A 44 Scotland Street Novel

We are back in Scotland Street, where Bertie is now living with his father and younger brother, Ulysses, his mother, Irene, having gone off to Aberdeen (at long last, in the view of some). Bertie’s father has found a friend, and is trying to get to know her better. Irene, though, may have other ideas. Big Lou is developing her coffee bar, aided by her new business partner, Matthew, father of triplets and dealer in art. Bruce, the confirmed narcissist, meets a charming dental hygienist. Will he reform and settle down? The mysterious Italian nun who arrived in Scotland with Antonia, one of the residents of Scotland Street, is becoming more enigmatic. Her meteoric social rise, however, continues unabated. She is now on the board of the Scottish National Gallery and is planning a rehang of the nation’s paintings. Will she get away with that?

Alexander McCall Smith is the author of the highly successful No. 1 Ladies’ Detective Agency series, which has sold over twenty-five million copies. Since then he has devoted his time to the writing of fiction and has seen his various series of books translated into over forty-six languages and become bestsellers throughout the world. These include the 44 Scotland Street novels, first published as a serial novel in the Scotsman, the Isabel Dalhousie novels, the Von Igelfeld series and the Corduroy Mansions novels.