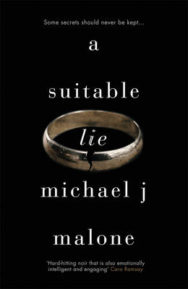 Andy Boyd thinks he is the luckiest man alive. Widowed with a young child, after his wife dies in childbirth, he is certain that he will never again experience true love. Then he meets Anna. Feisty, fun and beautiful, she’s his perfect match …and she loves his son like he is her own. When Andy ends up in the hospital on his wedding night, he receives his first clue that Anna is not all that she seems. Desperate for that happy-ever-after, he ignores it. A dangerous mistake that could cost him everything.A brave, deeply moving, page-turning psychological thriller, A Suitable Lie marks a stunning departure for one of Scotland’s finest crime writers, exploring the lengths people will go to hide their deepest secrets, even if it kills them…

Michael Malone is a prize-winning poet and author who was born and brought up in the heart of Burns’ country, just a stone’s throw from the great man’s cottage in Ayr. Well, a stone thrown by a catapult. He has published over 200 poems in literary magazines throughout the UK, including New Writing Scotland, Poetry Scotland and Markings. His career as a poet has also included a (very) brief stint as the Poet-In-Residence for an adult gift shop. Blood Tears, his bestselling debut novel won the Pitlochry Prize (judge: Alex Gray) from the Scottish Association of Writers.Other published work includes: Carnegie’s Call (a non-fiction work about successful modern-day Scots); A Taste for Malice; The Guillotine Choice; and Beyond the Rage. His poetry includes: In The Raw, Running Threads and Lip Synch. Michael is a regular reviewer for the hugely popular crime fiction website www.crimesquad.com. A former Regional Sales Manager (Faber & Faber) he has also worked as an IFA and a bookseller.