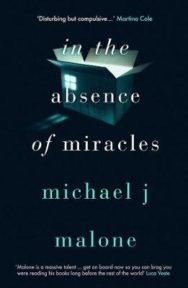 Home > Fiction from Scotland > In the Absence of Miracles

In the Absence of Miracles

A young man discovers a family secret that turns his world upside down in this dark, emotive, shocking psychological thriller by number-one bestselling author Michael J. MaloneJohn Docherty’s mother has just been taken into a nursing home following a massive stroke and she’s unlikely to be able to live independently again. With no other option than to sell the family home, John sets about packing up everything in the house. In sifting through the detritus of his family’s past he’s forced to revisit, and revise his childhood.For in a box, in the attic, he finds undeniable truth that he had a brother who disappeared when he himself was only a toddler. A brother no one ever mentioned. A brother he knew absolutely nothing about. A discovery that sets John on a journey from which he may never recover.For sometimes in that space where memory should reside there is nothing but silence, smoke and ash. And in the absence of truth, in the absence of a miracle, we turn to prayer. And to violence.Shocking, chilling and heartbreakingly emotive, In the Absence of Miracles is domestic noir at its most powerful, and a sensitively wrought portrait of a family whose shameful lies hide the very darkest of secrets.

Michael Malone is a prize-winning poet and author who was born and brought up in the heart of Burns’ country, in Ayr. He has published over 200 poems in literary magazines throughout the UK, including New Writing Scotland, Poetry Scotland and Markings. His career as a poet has also included a (very) brief stint as the Poet-In-Residence for an adult gift shop. Blood Tears, his bestselling debut novel won the Pitlochry Prize (judge: Alex Gray) from the Scottish Association of Writers. Other published work includes: Carnegie’s Call (a non-fiction work about successful modern-day Scots); A Taste for Malice; The Guillotine Choice; Beyond the Rage and The Bad Samaritan. His psychological thriller, A Suitable Lie, was a number one bestseller on AU/UK ebook charts, and House of Spines soon followed suit. Michael is a regular reviewer for the hugely popular crime fiction website www.crimesquad.com. A former Regional Sales Manager (Faber & Faber) he has also worked as an IFA and a bookseller.Follow Michael on Twitter @michaelJmalone1