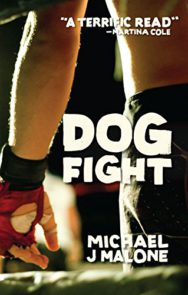 Kenny O’Neill, a hardman with a heart, returns in an unflinching tale of violence, street gangs and family secrets. When Kenny’s cousin, Ian, needs to pay off ever-spiralling debts, he gets caught up in the vicious underground fight scene, where vulnerable ex-servicemen are at the mercy of callous criminal gangs. With Ian in too deep to escape, Kenny soon realizes he has no option other than to infiltrate the gang to free his cousin. Kenny is an experienced MMA fighter, as tough as they come, but has he found himself in the one fight he can never win?

Michael J. Malone is the author of four previous crime novels starring DI Ray McBain and/or Kenny O’Neill: the Pitlochry Prize-winning Blood Tears, A Taste for Malice, Beyond the Rage and 2016’s Bad Samaritan. His thriller The Guillotine Choice is the amazing true story of an innocent man’s time in the notorious Devil’s Island penal colony.