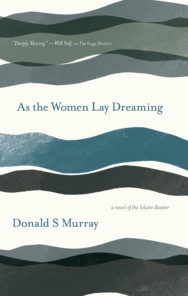 As the Women Lay Dreaming

In 1936, Alasdair and Rachel are sent by their grieving father to the Outer Hebrides – to the remote and strange Isle of Lewis. The children move in to the blackhouse home of their grandfather and experience a traditional way of life that is a world away from the Glasgow of their earliest years.

They soon discover that their kindly granddad is a man unlike others. He thinks differently, has a strong creative streak and still longs for his beautiful first wife, who died too young. And there
is one event that shapes him more than any other – the sinking of the HMY Iolaire, which claimed the lives of some 200 people on the very last leg of their long journey home from war.

In this deeply moving, beautiful novel about grief, constraint and a changing world, Donald S Murray tells the story of a survivor of the World War I Iolaire disaster. And he vividly illustrates the lasting impact of catastrophic events on communities, on individuals and on our very souls.

A son of the Hebrides, Donald S. Murray is a writer and poet whose work has been shortlisted for both the Saltire Literary Awards and the Callum Macdonald Memorial Award. His critically acclaimed books bring to life the culture and nature of the Scottish islands, and he appears regularly on BBC Radio 4 and BBC Radio Scotland.