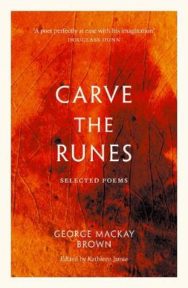 In this new Selected Poems, Kathleen Jamie explores the multi-faceted world of George Mackay Brown’s Orkney, the poet’s lifelong home and inspiration. George Mackay Brown’s concerns were the ancestral world, the communalities of work, the fables and religious stories which he saw as underpinning mortal lives. Brown believed from the outset that poets had a social role and his true task was to fulfil that role. This is not the attitude of a shrinking violet, tentatively exploring his ‘voice’. Art was sprung from the community, and his role as poet to know that community, to sing its stories. But there was also room for introspection; the poet’s task was simultaneously to ‘interrogate silence’.

George Mackay Brown (1921-96) was one of the twentieth century’s most distinguished and original writers. His lifelong inspiration and birthplace, Stromness in Orkney, moulded his view of the world, though he studied in Edinburgh and later at Newbattle Abbey College. He produced a regular stream of publications from 1954 onwards. These included A Calendar of Love (1967), A Time to Keep (1969), Greenvoe (1972), Hawkfall (1974), and, notably, the novel Beside the Ocean of Time (1994), which was shortlisted for the Booker Prize and won the Saltire Book of the Year.Kathleen Jamie is a poet and essayist. Her 1995 collection The Queen of Sheba won the Somerset Maugham Award and the Geoffrey Faber Memorial Prize and was shortlisted for the TS Eliot Prize and the Mail on Sunday/John Llewellyn Rhys Prize; The Tree House (2002) also won the Forward Poetry Prize and the Scottish Book of the Year Award; The Overhaul, published in 2012, won the Costa Poetry Award. In 2016 Kathleen won both the Saltire Poetry Book of the Year and the overall Saltire Book of the Year for her collection The Bonniest Companie