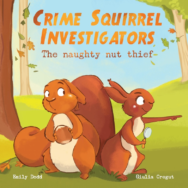 Rosie’s secret hazelnut store has been ransacked and her best friend Charlie agrees to help her to find the naughty nut thief. The crime squirrel investigators only have left-over nutshells as a clue, so they watch the different ways the three main suspects eat hazelnuts to try to solve the crime. Help the two squirrels discover the naughty nut thief and learn about the different ways animals eat nuts along the way!

Written by Emily Dodd and illustrated by Giulia Cregut.

EMILY DODD loves science and wildlife. She is the author of picture books and non-fiction science books, a screenwriter for CBeebies and a writer of BBC radio plays for children. Emily spent several years working in museum education and has written science shows, workshops and stories for the Scottish Seabird Centre, Edinburgh International Science Festival, the National Museums Scotland and Our Dynamic Earth. Emily was the 2012/2013 Scottish Book Trust Reader in Residence at Leith Library. She once performed a poem about puffins to the Queen.    GIULIA CREGUT has been in love with art all her life. She began to draw and paint as soon as she was given her first crayons as a child. At school she struggled with maths, English, and science…luckily she found art. She studied painting, drawing and other disciplines for six years at the Centro d’arte Martenot, in Francesca Del Panta’s Studio, Italy. From 2014 to 2017 she studied illustration at the Nemo Academy in Florence. She now loves her work as a freelance illustrator. CSI is her first English language picture book.