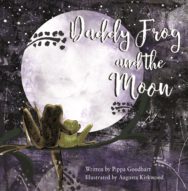 Daddy Frog and the Moon

When Frog becomes Daddy Frog he longs to show his little Baby Frog just how much he loves her. As he searches for a present that will express his love, he misses out on special time shared with Baby Frog as she grows into a little frog … until his great leap to try to catch her the moon launches Baby Frog into the leaping she longs to do with her Daddy. They joyfully leap together and Daddy Frog learns that vital truth that he doesn’t need to prove his love for Baby Frog, but just be there for her.

Written by Pippa Goodhart and illustrated by Augusta Kirkwood.

PIPPA GOODHART was a bookseller in Cambridge before becoming a writer. In twenty-five years of writing since then she has had more than a hundred books published, some of them award winning. She is perhaps best known for her books, illustrated by Nick Sharratt, which have sold well over a million copies, and the storybooks which she writes under the pen name of Laura Owen. Pippa does lots of school and festival visits, and also teaches adults who want to write for children via Cambridge University’s ICE courses and Jericho Writers.    AUGUSTA KIRKWOOD is a recently graduated Scottish illustrator who grew up in the Highlands surrounded by her many siblings and pets. She studied illustration at Edinburgh College of Art where she discovered and developed her love for children’s picture books. Drawing from her childhood, Augusta creates illustrations that capture the innocence and playfulness of animal friends, whilst experimenting with character, textures and colours.