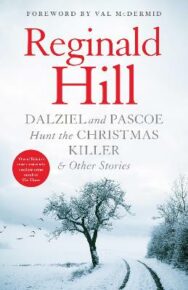 Dalziel and Pascoe Hunt the Christmas Killer & Other Stories

A vicar nailed to a tree in Yorkshire.The theft of a priceless artefact during a fire.A detective forced to tell the truth for 24 hours.A body hidden in a basement.From the restless streets of London to the wilds of the Lake District, displaying all his trademark humour, playfulness and clever plotting, this landmark collection brings together the very best of Reginald Hill’s short stories for the first time, complete with a foreword from Val McDermid.’One of Britain’s most consistently excellent crime novelists’The Times’A real treat. The characters are deftly drawn, the plot constantly delivers, surprises and the assured narrative demonstrates again what a terrific writer he is’Observer’Reginald Hill’s novels are really dances to the music of time, his heroes and villains interconnecting, their stories intertwining’Ian Rankin’The finest male English contemporary crime writer’Val McDermid

Reviews of Dalziel and Pascoe Hunt the Christmas Killer & Other Stories

PRAISE FOR REGINALD HILL'Reginald Hill's novels are really dances to the music of time, his heroes and villains interconnecting, their stories intertwining'Ian Rankin'The finest male English contemporary crime writer'Val McDermid'So far out in front that he need not bother looking over his shoulder'Sunday Telegraph'Few writers in the genre today have Hill's gifts: formidable intelligence, quick humour, compassion and a prose style that blends elegance and grace'Donna Leon, Sunday Times'One of Britain's most consistently excellent crime novelists'The Times'Altogether an enjoyable performance, one of Mr Hill's best'Financial Times'These novels last, like a grand malt whisky – rounded, rich, intoxicating… Here is an author at his formidable best'Frances Fyfield, Mail on Sunday'He is probably the best living male crime writer in the English-speaking world'Andrew Taylor, Independent'Reginald Hill stands head and shoulders above any other writer of homebred crime fiction'Observer

Reginald Hill is a native of Cumbria and former resident of Yorkshire, the setting for his novels featuring Superintendent Dalziel and DCI Pascoe, ‘the best detective duo on the scene bar none’ (‘Daily Telegraph’). Their appearances have won him numerous awards including a CWA Gold Dagger and Lifetime Achievement award. They have also been adapted into a hugely popular BBC TV series.Val McDermid is a No.1 bestseller whose novels have been translated into more than thirty languages, and have sold more than sixteen million copies. She has won many awards internationally, including the CWA Gold Dagger for best crime novel of the year. She was inducted into the ITV3 Crime Thriller Awards Hall of Fame in 2009, was the recipient of the CWA Cartier Diamond Dagger in 2010. Val writes full time and lives in Edinburgh and the East Neuk of Fife.