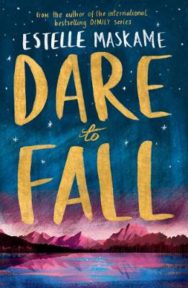 Death. She was afraid of it. He was used to it. There’s not much that MacKenzie Rivers is afraid of. In the small town of Windsor, Colorado, she is known for her easygoing, strong personality, some would even say she isn’t afraid of anything. But MacKenzie knows that’s not true. She’s afraid of losing those closest to her. Recovering from a family tragedy, Kenzie is fully aware of just how big an impact death can have on those it leaves behind. Seeing its effects on other people is something she just can’t quite handle. From now on, Kenzie is her own priority. There are not many things that Jaden Hunter can make sense of. He doesn’t understand why it was his parents who lost their lives last year. He doesn’t understand why his friends don’t crack jokes around him any more. He doesn’t understand why his teachers still insist on letting him skip assignments. He doesn’t understand why MacKenzie, the girl he was falling for last year, has suddenly distanced herself from him.Too afraid to get wrapped up in Jaden’s world as he deals with the tragic death of his parents, Kenzie has stayed away from him as best she can, until one night when they unexpectedly come face-to-face for the first time in months.As old feelings resurface and new memories are made, both MacKenzie and Jaden show each other how to appreciate the little things in life, the moments that are taken for granted. But will MacKenzie dare to fall for the one person she’s so afraid of growing close to?

Estelle Maskame started writing at the age of 13 and completed her DIMILY trilogy when she was 16. She has already built an extensive and loyal fanbase for her writing around the world by sharing her work in instalments on the digital platform Wattpad. The DIMILY trilogy has now been published, with rights sold in 14 territories and becoming an international bestseller. Estelle won the Young Scot Arts Award in 2016, and has been shortlisted for the Young Adult award at the Romantic Novel of the Year Awards. Dare to Fall is Estelle’s first novel following the success of the DIMILY trilogy.