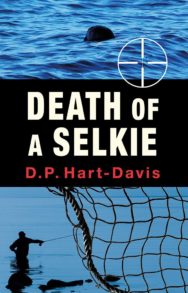 Home > Fiction from Scotland > Thriller > Death of a Selkie

Death of a Selkie

A dark net tightens on the tiny fishing Scottish fishing community of Kildrumna as conflicting forces loom. Tensions mount between owner of an expanding salmon farming enterprise in the pristine bay, local conservationists and the owners of a sporting lodge. When renowned millionaire environmentalist and keen diver Gunnar Larsen arrives on the scene with his beautiful new wife Ravenna, a deadly chain of events unfolds.

Detective Chief Inspector Robb, on holiday there with his troubled teenage daughter Marina, have their trout, salmon, sea fishing and diving idyll interrupted in a way they could never have imagined.

Twisting and turning like a foul-hooked fish, D.P.Hart-Davis’s latest sporting thriller highlights the tension between conservation and exploitation in Scotland’s fastest-growing food industry…

After a career in magazines and journalism, D.P. Hart-Davis was fiction-buyer for the Mirror Group.

She has had 16 novels published and was a columnist for the Daily Telegraph and Daily Mail, as well as for several country magazines.

Death of a Selkie is the latest in Hart-Davis’ highly-acclaimed sporting thrillers, following the success of The Stalking Party and Death of a High Flyer.

Married to author and journalist Duff Hart-Davis, she lives on a small farm in Gloucestershire.