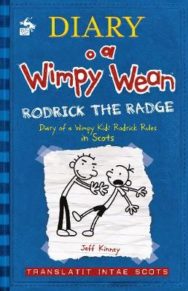 Mind how I said that if some bam seen me cairtin aboot a book wi “diary” on the front, they were gonnae get the wrang idea? Weel, nae prizes for guessin whit happened the day.Noo Rodrick kens I’m daein anither journal, I’d better mind and keep this yin stowed awa. Rodrick managed tae get his hauns on ma LAST journal… But dinnae get me stairtit on aw THAT again. Even when Rodrick wisnae stirrin it, ma summer wis a pure scunner.Sae if ye’re wantin tae ken whit I got up tae durin the summer holidays, jist dinnae ask. I’m no in the mood.

Jeff Kinney is the #1 USA Today, New York Times, and Wall Street Journal bestselling author of the Diary of a Wimpy Kid series and a six-time Nickelodeon Kids’ Choice Award winner for Favourite Book. Wrecking Ball, book 14, was published in November 2019, and was an instant #1 global bestseller. Diary of an Awesome Friendly Kid: Rowley Jefferson’s Journal was published in April 2019, was an instant #1 global bestseller. Jeff has been named one of Time magazine’s 100 Most Influential People in the World. He is also the creator of Poptropica, which was named one of Time’s 50 Best Websites. He spent his childhood in the Washington, D.C., area and moved to New England in 1995. Jeff lives with his wife and two sons in Massachusetts, where they own a bookstore, An Unlikely Story.