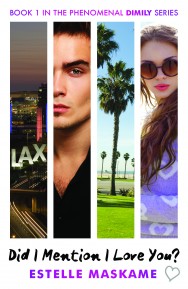 Home > Children's > Fiction > Did I Mention I Love You?

Did I Mention I Love You?

When sixteen-year-old Eden Munro agrees to spend the summer with her estranged father in the beachfront city of Santa Monica, California, she has no idea what she s letting herself in for. Eden’s parents are divorced and have gone their separate ways, and now her father has a brand new family. For Eden, this means she’s about to meet three new step-brothers. The eldest of the three is Tyler Bruce, a troubled teenager with a short temper and a huge ego. Complete polar opposites, Eden quickly finds herself thrust into a world full of new experiences as Tyler’s group of friends take her under their wing. But the one thing she just can’t understand is Tyler, and the more she presses to figure out the truth about him, the more she finds herself falling for the one person she shouldn’t: her step-brother. Throw in Tyler’s clingy girlfriend and a guy who has his eyes set on Eden, and there’s secrets, lies and a whole lot of drama. But how can Eden keep her feelings under control? And can she ever work out the truth about Tyler? Did I Mention I Love You is the first book in the phenomenal DIMILY trilogy, following the lives of Eden Munro and Tyler Bruce as they try to find their way in an increasingly confusing world.

Estelle Maskame started writing at the age of 13 and completed her DIMILY trilogy when she was 16. She has already built an extensive and loyal fanbase for her writing around the world by sharing her work in instalments on the digital platform Wattpad. Estelle’s trilogy will now be available for the first time in book and ebook formats. The news of her publishing deal has now gone viral, and her fans are eagerly anticipating publication.