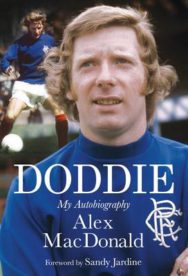 This is the autobiography of a Rangers legend. Alex MacDonald’s compelling memoirs cover his formative years as a player with St Johnstone, his rise to fame with Rangers, his transfer to Hearts where he became player-manager, and his time in charge at Airdrie. But Doddie is quintessentially a Rangers man, having grown up in Glasgow supporting them and then going on to play a key role in the club’s 1972 Cup Winners’ Cup triumph. Doddie won 12 medals in a glittering career, including a highly-prized European one during his time with Rangers, yet as he reveals, a chance meeting with Celtic manager Jock Stein might have resulted in him signing for the Old Firm’s other half. Etched indelibly in his memory, too, is the dejection he suffered when Hearts lost the League Championship and Scottish Cup within the space of a week in the mid-1980s and his subsequent delight at leading Airdrie into Europe. Doddie is a fascinating story, both for his lifelong love affair with football and his more personal story of growing up in Glasgow, his love of animals and his midlife crisis when he put the car in the garage and headed out on the highway on a brand new Harley Davidson.It has been a life full of adventures and characters and the highs and lows of his life and career are entertainingly and engagingly told.

Co-author Brian Scott is a long-time scribe with the Daily Mail in Scotland and has covered eight World Cups, including the six involving the Scottish national side between 1974 and 1998. Brian has known Alex personally for more than 40 years – from the beginning of his time with Rangers – and has written regularly about him ever since.