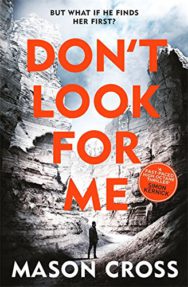 Don’t Look For Me

Don’t look for me.

It was a simple instruction. And for six long years Carter Blake kept his word and didn’t search for the woman he once loved. But now someone else is looking for her.

He’ll come for you.

Trenton Gage is a hitman with a talent for finding people – dead or alive. His next job is to track down a woman who’s on the run, who is harbouring a secret many will kill for.

Both men are hunting the same person. The question is, who will find her first?

Mason Cross is the author of the Carter Blake thriller series. The first book, The Killing Season, was published by Orion in 2014, followed by The Samaritan, The Time to Kill (titled Winterlong in the USA), and Don’t Look For Me. Mason Cross’s short crime stories have been published in magazines including Ellery Queen and First Edition. His story, ‘A Living’, was shortlisted for the Quick Reads ‘Get Britain Reading’ Award. The Killing Season was longlisted for the 2015 Theakstons Old Peculier Crime Novel of the Year award, and The Samaritan was selected for the Richard and Judy Book Club for Spring 2016.