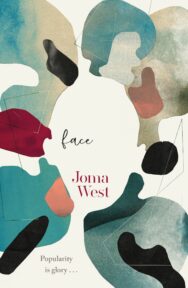 Schuyler and Madeleine Burroughs have the perfect Face―rich and powerful enough to assure their dominance in society. But in SchAddie’s household, cracks are beginning to appear. Schuyler is bored and taking risks. Maddie is becoming brittle, her happiness ever more fleeting. And their menial is fighting the most bizarre compulsions. In Face, skin color is an aesthetic choice designed by professionals, consent is a pre-checked box on the path to social acceptance, and your online profile isn’t just the most important thing―it’s the only thing.

'One of the more deeply interesting books I've read this year. Face has more ideas and more originality than most!' Claire North

'A fantastic, futuristic reimagining of the comedy of manners novel, written for our time. West's novel shocks and intrigues in equal measure.' T. L. Huchu

Joma West is a third culture writer whose work straddles both fantasy and science fiction. Growing up bouncing between countries has given her work a certain displaced flavour and you can see many African and Asian influences in her writing. Joma’s novella, Wild, won the 2016 MMU novella award. She has had short stories published in various anthologies. She lives in Glasgow.