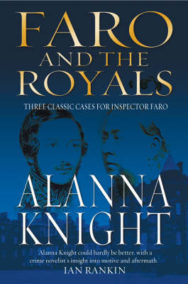 Home > Fiction from Scotland > Faro and the Royals

Faro and the Royals

This trilogy, published in paperback for the first time, features Inspector Faro in three of his most intriguing and dangerous cases as the royal family call on their favourite detective for help. THE BULL SLAYERS: As Prince of Wales, Bertie’s reputation and, more importantly, his life are in danger during a social scandal. An almost fatal shooting party also introduces Faro to the writer Imogen Crowe, destined to play an important role in his life. THE MISSING DUCHESS: An investigation into the mysterious and sinister disappearance of the Queen’s god-daughter Grand Duchess Amelie during a royal visit to Scotland, is fraught with intrigue and deadly peril. THE FINAL ENEMY: At Her Majesty’s command, Faro escorts twelve-year-old Prince George, heir to the kingdom of Luxoria and a pupil at public school in Scotland, on a journey across Europe on the Orient Express – but Faro has a secret that may cost them both their lives.

Reviews of Faro and the Royals

"'Alanna Knight, one of Britain's top crime writers' The Sun"

Alanna Knight is a novelist, biographer and playwright. She has published over fifty novels, as well as non-fiction works on Robert Louis Stevenson. A member of the Crime Writers’ Association and the Society of Authors and a lecturer for the Scottish Book Trust’s Writers in Scotland Scheme, Alanna is married with two sons and two granddaughters. She lives in Edinburgh.