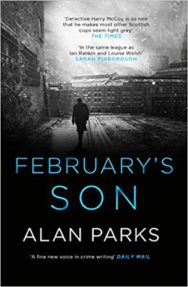 Bodies are piling up with grisly messages carved into their chests. Rival gangs are competing for control of Glasgow’s underworld and it seems that Cooper, McCoy’s oldest friend, is caught up in it all.

New drugs have arrived in Glasgow, and they’ve brought a different kind of violence to the broken city. The law of the street is changing and now demons from McCoy’s past are coming back to haunt him. But vengeance always carries a price, and it could cost McCoy more than he ever imagined.

The waters of Glasgow corruption are creeping higher, as the wealthy and dangerous play for power. And the city’s killer continues his dark mission.

Can McCoy keep his head up for long enough to solve the case?

Bruised and battered from the events of Bloody January, McCoy returns for a breathless ride through the ruthless world of 1970s Glasgow. 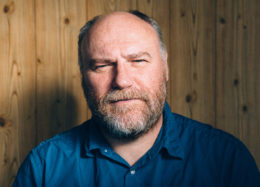 Alan Parks has worked in the music industry for over twenty years. His debut novel Bloody January was one of the top crime debuts of 2018 and was shortlisted for prestigious international crime prize the Grand Prix de Littérature Policière. He lives and works in Glasgow.