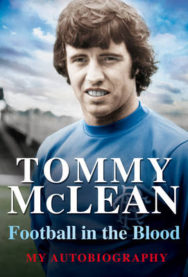 Football in the Blood: My Autobiography

Tommy McLean made history as a player and a manager, but behind the triumph is an untold story. As one-third of Scottish football’s best-known team of brothers, McLean sampled the incredible highs. He became a Rangers legend as an integral part of the European Cup Winners’ Cup-winning team in 1972 and as a mainstay of Jock Wallace’s treble-winning heroes in the years that followed. As a manager he took Motherwell from the brink of bankruptcy to victory in the Scottish Cup final and European football. That memorable triumph is however tinged with pain for McLean, who faced his brother Jim’s Dundee United in the cup final just days after the death of their father. And there was further personal turmoil behind the scenes during that momentous game, a story McLean reflects on publicly for the first time. The years that followed have been filled with further joys and sorrows, including a tumultuous spell in charge of Hearts, a controversial six-day spell as manager of Raith Rovers, and a time as manager of Dundee United under the chairmanship of his older brother, Jim.He was also recruited by David Murray to head up Rangers’ youth system, but stepped away from football to concentrate on more important family matters. Here in his exclusive book, Tommy McLean tells all, making Football in the Blood a must-read for any football fan.