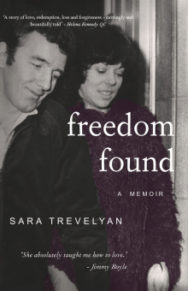 What was it like to be married to Scotland’s most famous prisoner?

Sara Trevelyan was independent, clever, and privileged. She was a qualified doctor who campaigned for penal reform. She fell in love with and in 1980 married Jimmy Boyle, a convicted murderer who had become a famous writer and sculptor. For the first four years of their marriage he was in jail, visits were few and their life lived under the scrutiny of the media. In this intimate memoir, we learn why Jimmy admits, “If it hadn’t been for Sara’s courage, I would still be in prison.”

She is a sure-footed guide through the extraordinary life they were called to lead. Her description of their eventual divorce is without bitterness or resentment, rather a tale of forgiveness and compassion. As a doctor and therapist, a spokeswoman for prisoner rehabilitation, and a wife and mother Sara is a courageous voyager. She realised what a journey it took to understand and to live into the quotation from Blake, “We are put on earth a little space, That we might bear the beams of love.”

Sara Trevelyan graduated as a medical doctor in 1977 at St Thomas’s Hospital in London. She married Jimmy Boyle when he was an inmate in the Barlinnie Special Unit in 1980. After working in hospitals and medicine briefly, she left to explore mental health in the community, conducting an action research project for the Scottish Association for Mental Health. She was the co-founder and director of The Gateway Exchange in Edinburgh for eight years and for the past twenty-seven years has worked as a self employed counsellor and psychotherapist. Sara lives and works between Edinburgh and Findhorn.