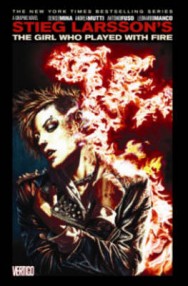 Home > Fiction from Scotland > Girl Who Played with Fire

Girl Who Played with Fire

In this graphic novel adaptation of Stieg Larrson’s The Girl Who Played with Fire, Mikael Blomkvist, crusading publisher of the magazine Millennium, has decided to run a story that will expose an extensive sex trafficking operation. On the eve of its publication, the two reporters responsible for the article are murdered, and the fingerprints found on the murder weapon belong to his friend, the troubled genius hacker Lisbeth Salander. Blomkvist, convinced of Salander’s innocence, plunges into an investigation. Meanwhile, Salander herself is drawn into a murderous game of cat and mouse, which forces her to face her dark past.

Stieg Larsson, who lived in Sweden, was the editor in chief of the magazine Expo and a leading expert on antidemocratic right-wing extremist and Nazi organizations. He died in 2004, shortly after delivering the manuscripts for The Girl with The Dragon Tattoo, The Girl Who Played with Fire, and The Girl Who Kicked the Hornet’s Next. Denise Mina is the award-winning author of eight acclaimed crime novels and is one of the leading figures in Scotland’s “Tartan Noir” genre of crime fiction. Her novel STILL MIDNIGHT was published in March 2010. Denise made her comics debut with a 13-issue run of HELLBLAZER in 2006-2007. Her first graphic novel was the Vertigo Crime title A SICKNESS IN THE FAMILY.