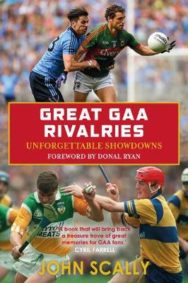 Fans always answer in the affirmative when their team asks: Will you still love me tomorrow? However, for many GAA fans it is their rivalries that root them, guide them and define them. This book celebrates the many age-old rivalries that have energised, enlivened and enhanced the GAA.Based on exclusive interviews with a veritable who’s who of the great and the good of Gaelic Games, this book offers insights into the myriad controversies and thrilling events on and off the field which these rivalries have generated.Written with the intimate knowledge of an insider, it recalls iconic episodes alongside incidents that have never before come to public attention. Full of arresting anecdotes these pages capture the unique pride and passion of Ireland’s greatest national treasures: Gaelic football, hurling, ladies’ football and camogie.

`Pulsates with the thrills and spills of epic contests, clashes and controversies. A must read book for GAA fans. It reminds us of who we are.' – JOHN O'MAHONY; `A book that will bring back a treasure trove of great memories for GAA fans.' – CYRIL FARRELL

John Scally is a lecturer in Trinity College, but in his spare time is a writer and broadcaster. Since 1992 he has written 40 books with cumulative sales of over 150,000 copies. He is the author of the biggest selling GAA book in Ireland, Raising the Banner:The Biography of Ger Loughnane, and for a few years his biography of Tony Ward was the biggest selling rugby book in Ireland.