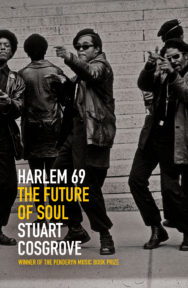 Harlem 69: The Future of Soul

In 1969, among Harlem’s Rabelaisian cast of characters are bandleader King Curtis, soul singers Aretha Franklin and Donny Hathaway, and drug peddler Jimmy ‘Goldfinger’ Terrell. In February a raid on tenements across New York leads to the arrest of 21 Black Panther party members and one of the most controversial trials of the era. In the summer Harlem plays host to Black Woodstock and concerts starring Sly and the Family Stone, Stevie Wonder and Nina Simone. The world’s most famous guitarist, Jimi Hendrix, a major supporter of the Black Panthers, returns to Harlem in support of their cause.

By the end of the year Harlem is gripped by a heroin pandemic and the death of a 12-year-old child sends shockwaves through the USA, leaving Harlem stigmatised as an area ravaged by crime, gangsters and a darkly vengeful drug problem.

Stuart Cosgrove originally from Perth, was a fanzine writer on the northern soul scene before joining the black music paper Echoes, as a staff writer. He became media editor with the NME and a feature writer for a range of newspapers and magazines. In 2005 he was named Broadcaster of the Year in the Glenfiddich Spirit of Scotland Awards and in 2012 he won numerous awards including a BAFTA and Royal Television Society award for Channel 4’s coverage of the London Paralympics 2012.