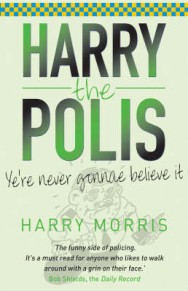 This is a fourth instalment of funny, strange and utterly true tales from “Harry the Polis”. The fourth “Harry the Polis” book, “Yer Never Gonny Believe It”, continues to expose the lighter side of our industrious police force. Harry Morris’s time with the Glasgow and Strathclyde constabulary, or ‘polis’ for short, hasn’t robbed him of his sense of humour, and every wily witness, cocky con, and sarcastic sergeant he ever rubbed up against is here in page after page of humorous stories. Full of hilarious anecdotes, oddball characters, quick comebacks and unlikely excuses, “Yer Never Gonny Believe It” shows true Scottish humour at its finest. There’s plenty more material from Harry’s twenty-nine year career in the rank and file. As in his previous three books, Harry serves up one hilarious story after another from his vast catalogue of polis escapades. Already described by Alex Dickson of Radio Clyde as “classics of our time” and by Bob Shields of the “Daily Record” as “a must read for anyone who likes to walk about with a grin on their face”, “Yer Never Gonny Believe It” is sure to arrest you with its irrepressible mirth.

Harry Morris served for twenty-nine years in various posts throughout Strathclyde Police. He first began writing down the funny stories that surrounded him as a way to brighten up the internal newsletter, but making people laugh soon became Harry the Polis’s real passion.