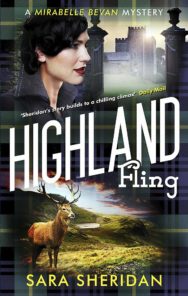 Britain is awash in Cold War anxiety as Mirabelle Bevan heads for the Highlands on a holiday to visit Superintendent Alan McGregor’s family. More glamorous than she expected, the Robertsons welcome her with open arms and an array of cocktails, but she has scarcely arrived when the body of an American fashion buyer turns up brutally murdered, plunging the local village into disarray and sending shockwaves around the close, Highland community.

Mirabelle can’t resist investigating, but what she finds lays the limitations of her feelings for McGregor bare and calls into question the loyalties of all those around her from the Robertson’s housekeeper Mrs Gillies to the family of the dead woman. What started as a relaxing break in scenic surroundings soon spirals into a week fraught with danger. As the press descend on the Robertson’s Highland estate, it rapidly becomes clear that things are not as black and white as they first appeared and Mirabelle can’t count on anyone . . .

Sara Sheridan was born in Edinburgh and studied at Trinity College, Dublin. As well as writing the popular Mirabelle Bevan Murder Mysteries, she also writes a set of historical novels set between 1820 and 1845, one of which was shortlisted for the Wilbur Smith Award 2017. Fascinated particularly by female history, she is a cultural commentator who appears regularly on television and radio. She also writes commercial non-fiction, including the 2017 tie-in book for the ITV series Victoria and, in 2018, an imagined female atlas of Scotland. Sara tweets about her writing life as @sarasheridan and has a Facebook page at @sarasheridanwriter.