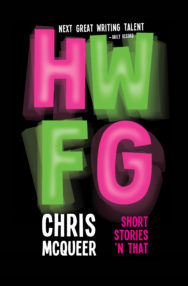 Your fave Sammy gets a job and Angie goes to Craig Tara.

Plans are made to kick the f*ck out of Kim Jong-Un.

You’ll find answers to the big questions in life:

What happens when we die?

What does Brexit actually mean?

Why are moths terrifying?

Chris McQueer is a 20-something year old writer in Glasgow. Chris kept his writing a secret from his friends and family for several months before his girlfriend, Vanessa, encouraged him to share his work through Twitter (@ChrisMcQueer_). Since then he has earned a reputation as ‘That Guy Oan Twitter Who Writes Short Stories’.