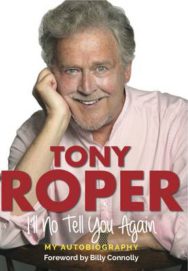 I’ll No Tell You Again: My Autobiography

Tony Roper is one of Scotland’s most recognisable faces. Best known for playing Jamesie Cotter in Rab C. Nesbitt, he is also famed for appearing in much-loved Scottish comedies Scotch & Wry and Naked Video, as well as for writing the classic comedy-drama The Steamie. Now, in this revealing autobiography, he tells his life story for the first time. From his childhood in Glasgow and Ireland to toiling in coal mines, building sites and ship yards, Roper’s journey to acting was a long one. After studying at the College of Dramatic Art aged twenty-seven, he struggled to make a living until getting his big break with Scotch & Wry. He later starred in Only an Excuse and worked closely with Rikki Fulton, whom he later played in his self-penned drama Rikki and Me, developing a successful career as a writer alongside his acting. Yet alongside the accolades, Roper has faced adversity through the years, facing four operations in eight months after a shock prostate cancer diagnosis. In I’ll No Tell You Again, Roper tells his hilarious and inspiring story.

Author of Bafta award-winning play The Steamie, and star of numerous radio and TV programmes, Tony Roper appeared with Rikki Fulton in many of the most memorable sketches in Scotch & Wry.