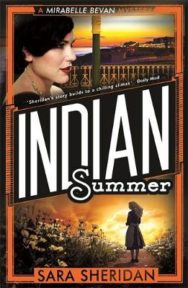 Brighton,1957Mirabelle Bevan can’t resist a cry for help, be it the little girl at a seaside sanatorium who is getting bullied or the strange behaviour of Uma, the Indian nurse who is looking after her. Intrigued she soon finds herself drawn into a spider’s web of connections between an upmarket brothel, local priest Father Grogan, a man’s body washed up on Brighton beach and a missing nursing sister.Attracted to handsome police doctor, Chris Williams, Mirabelle is determined to finally put her love affair with Jack Duggan behind her and recover from the betrayal of Superintendent Alan McGregor, but the police force in Brighton is undergoing a sea change that keeps leading her back to the sanatorium at the epicentre of a spate of brutal killings. And very soon it becomes apparent Mirabelle is in much more danger than she realises…’With sharp blows delivered for gender and racial equality, Sheridan’s story builds to a chilling climax’ Daily Mail

Beneath that prim exterior lies a fearless, fly-by-the-seat-of-her-pants kind of gal. One part Nancy Drew, two parts Jessica Fletcher, Mirabelle has a dogged tenacity to rival Poirot * Sunday Herald * Beautifully realised vivid characters, both heroes and villains, the atmospheric Brighton setting and plot that zipped along at a lovely pace left me in no doubt that Sara Sheridan and Mirabelle Bevan are a crime force to be reckoned with * Goodreads * Sara Sheridan never fails to surprise. Unfailingly stylish, undeniably smart, Miss Bevan is destined to bring the exploits of the past to the best-seller lists of the present * Daily Record *

Sara Sheridan was born in Edinburgh and studied at Trinity College, Dublin. As well as writing the popular Mirabelle Bevan Murder Mysteries, she also writes a set of historical novels set between 1820 and 1845, the latest of which was shortlisted for the Wilbur Smith Award. Fascinated particularly by female history, she is a cultural commentator who appears regularly on television and radio. In 2014, she was named one of the Saltire Society’s 365 Most Influential Scottish Women, past and present.Sara tweets about her writing life as @sarasheridan and has a Facebook page at sarasheridanwriter.