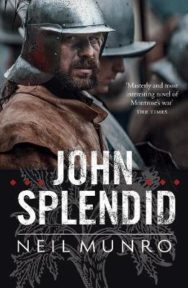 In the autumn of 1644 Colin, heir to the Laird of Elrigmore, returns to his native Argyll after seven years’ service as a soldier of fortune. He finds a land torn apart by bitter civil war, with the complex rivalries of Royalist and Parliamentarian, Catholic and Covenanter set against the ancient feuding of the Clans Campbell and MacDonald.At Inveraray, a town under imminent threat from the forces of the all-conquering Marquis of Montrose, Elrigmore meets the heroic John Splendid – like himself a veteran of the foreign wars and a man of great courage and resourcefulness. As the Royalist army descends on the town, both men find themselves inexorably drawn into the heart of the conflict as their loyalty to the clan chief, the Marquis of Argyll, takes precedence over everything else. But danger and disillusion lie in wait for them in the service of Argyll, as they embark on a series of extraordinary adventures amid the chaos and carnage of civil war in the Highlands.

Neil Munro was born in 1863, the illegitimate son of an Inverary kitchen maid. After leaving school, he worked for a spell in a lawyer’s office before leaving the Highlands for a career in journalism, eventually becoming the editor of the Glasgow Evening News. He is best known for his comic tales about Para Handy, but he also produced several historical and contemporary novels, as well as poetry and non-fiction. He died in 1930.