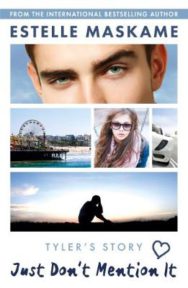 The one all DIMILY readers have been shouting for… Tyler’s story!Tyler Bruce the hell-raising bad-boy DIMILY readers all over the world have come to know and love. Now, they get to hear his story in his own words.Just Don’t Mention It is told from Tyler’s perspective, both as a twelve-year-old boy being mentally and physically abused by his father, and as a the rebellious seventeen-year-old we first met in Did I Mention I Love You?, helplessly falling for Eden.Alternating between these past and present timelines, we finally get to see the real story behind Tyler’s enigmatic facade. Revealing his innermost thoughts on his dad, his mum, on Eden, Tiffany, and all the things Eden wasn’t witness to this is Tyler as we have never seen him before. But most important of all, it gives heartbreaking insight into why Tyler becomes the angry, self-destructive figure we first encounter in DIMILY.Hugely moving and utterly addictive, Just Don’t Mention It gives voice to one of the most adored characters in Estelle Maskame’s bestselling trilogy.

Estelle Maskame started writing at the age of 13 and completed her DIMILY trilogy when she was 16. She has already built an extensive and loyal fanbase for her writing around the world by sharing her work in instalments on the digital platform Wattpad. The DIMILY trilogy has now been published, with rights sold in 16 territories and becoming an international bestseller. Estelle won the Young Scot Arts Award in 2016, and has been shortlisted for the Young Adult award at the Romantic Novel of the Year Awards.