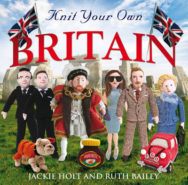 Knit Your Own Britain

Britain has had an influence on the world that far outweighs its size. With its rich history, beautiful landscapes and creative people, Britain is without doubt one of the greatest places in the world. And in Knit Your Own Britain, you can now create your own miniature woolly version! Knit Your Own Britain is a unique and beautiful collection of some of the finest British icons, from The Beatles and James Bond to Robin Hood and Henry VIII, and includes contemporary figures like David and Victoria Beckham and Ant & Dec. Fun, fascinating and fantastic, Knit Your Own Britain is a woolly celebration of some of the best of British.

Reviews of Knit Your Own Britain

Ruth Bailey was born and brought up in Thurso, Caithness. After gaining a postgraduate degree in painting from Edinburgh College of Art she went on to self train as a milliner. She currently works freelance as an artist, costume designer and prop maker for theatre and business. Jackie Holt has worked as a costume maker and a wardrobe supervisor in numerous theatres around Britain. She has worked in a freelance capacity on anything from small scale touring shows to supervising large scale musicals, such as 125th Street at the Shaftesbury Theatre in the West End and the sell-out 20th Anniversary concert of Sondheim’s Sweeney Todd at the Royal Festival Hall. Jackie and Ruth’s previous book, Knit Your Own Scotland, was a bestseller.