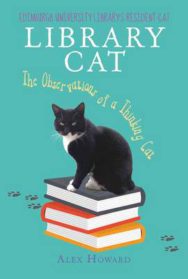 For the last year, Library Cat – the resident cat of Edinburgh University Library – has been watching. As a Human, you may not feel that watching is a particularly extraordinary thing for a cat to do. But Library Cat is different. Because not only was Library Cat watching, he was also thinking. Library Cat is a thinking cat. Thinking cats are rare. Look closely, though, and maybe you’ll spot one…The canny glint to the eye? The arched, disdainful whiskers? The unrelenting interest in books and piles of paper? That’s a thinking cat! This is a story about Library Cat, about his favourite turquoise chair in the library and his favourite food (bacon-rind). But, more importantly, this is a story about Library Cat’s thoughts and his own search for completeness in this fractured world. And it’s about us Humans, too. You see, with his black and white head bobbing a foot off the ground, Library Cat has seen us Humans from a very different angle…and he’s seen it all; from shame to sandwiches, from litter to love, from aeroplanes to Lord Byron. And he has some news: he thinks us Humans have it all wrong. And he’s going to show us why.LIBRARY CAT is a funny, witty and irreverent look at the world, seen through the unusually observant eyes of Edinburgh University Library’s resident cat.

Alex Howard is 27 and lives in Edinburgh. He graduated from Edinburgh University with a 1st class English degree in 2010, and has since had poetry published widely in journals such as The London Magazine, Cadaverine, and Gutter. He is the winner of the Red Cross International Writing Prize, a quarter-finalist in the Scottish Slam Championships 2012, and has performed his work at the Edinburgh Book Festival. In addition, he has had comedy writing shortlisted by the BBC and worked variously as a television researcher, ghost tour guide, and tutor. He is currently pursuing an AHRC funded PhD at Edinburgh University.