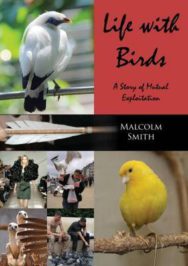 Home > Science and Nature > The Environment > Life with Birds: A Story of Mutual Exploitation

Life with Birds: A Story of Mutual Exploitation

Life with Birds uncovers the fascinating story of our interdependence with birds. The author weaves an amazing web of inter-relationships, from the Parsi funeral in Mumbai where birds of prey eat the dead; to collecting eider down from nests in Iceland and standing on the once body-strewn battlefield of Agincourt where birds won the day for the English army. From the earliest days of human existence we have exploited birds; for food, for their feathers, to satisfy our blood lust, to entertain us with their beauty, to inspire our art, our advertising, classical music, popular songs and much more. Cage birds are kept for their beauty and song but this book also investigates the repugnant illegal rare bird trade, and the organised crime it has spawned involving around 1.5 million birds a year. Criminals will go to unbelievable lengths when smuggling rare birds for sale and the 1.5m birds in this annual trade threaten the survival of several exotic species. Since time immemorial birds have exploited us too. Birds can use our homes to make theirs and can ruin farmers’ crops in minutes.Some of the most impressive birds have set up home on high-rise buildings, exploiting the city slicker pigeons that live off discarded fast food and much else. Life with Birds contains intriguing examples of the huge range of interactions between birds and people. How undercover law enforcement in the US is tackling a cruel and bloodthirsty ‘sport’; how birds are being used to smuggle drugs into a prison and across borders; controversial practices such as bird sacrifice in religious ceremonies; and how some Kenyan tribesmen are guided by a bird to find a food they both value. Many myths, magic and religious practices involving birds are exposed such as whether they can predict deadly mining disasters; whether they have killed anyone; and whether the eerie night-time calls in the precipitous mountains of Madeira are the souls of shepherds who have fallen to their deaths.If you have ever wondered what a nest made solely of bird saliva, considered a delicacy in some countries, tastes like or whether you knew Chairman Mao’s ‘kill a sparrow’ campaign in the 1950s resulted in many millions of Chinese dying of starvation, Life with Birds will provide enlightenment as well as a hugely enjoyable read.

Reviews of Life with Birds: A Story of Mutual Exploitation

'Each chapter begins with a personal anecdote, set around Smith's own encounters with bird's places, and peoples, ranging from the USA to Iceland, Egypt to India, France to Thailand, Libya to Spain, as well as his home ground, and it is from these foundations that are the chapters evolve into rewarding, energetic explorations of our relationships with birds. …Smith has sought out an array of lesser-known examples, and his text is worth mining for these alone. …I can only recommend Malcolm Smith's Life with Birds as a vivid tour through examples old and new, familiar and unfamiliar, and as a valuable introduction to our wider cultural interrelationships with the birds.' IBIS 'This is a fascinating book… …it leaves you with a genuine sense of the richness of the many points of contact we have with birds…' Scottish Birds '…it is refreshing to read this account, where the balance is maintained with numerous examples of how birds have learned, or evolved, to exploit us and our human landscapes and structures. … A refreshingly balanced look at the relationships between us and the birds around us.' BTO 'Malcolm Smith has done an incredible job in analysing and summarising the many ways in which birds and people interact with each other. … The author has amassed a treasure-trove of facts and figures… … In a style which moves easily between anecdote, statistic and historic or other truth he succeeds admirably in conveying the breadth and depth of all the things we do to and with birds. …it is packed with the curious and the thought-provoking. Its fascination itself mirrirs and endless fascination that we have for birds.' ECOS '…a thorough and all-embracing examination of our interdependence with birds: our exploitation of them and their expoitation of us. … Malcolm Smith's intriguing narrative is both informative and constantly engaging.' Birding World '…Malcolm Smith's fascinating book, gives a vivid vignette of the islanders' relationship with birds, one of countless such case studies… …his book is a terrific read.' Cage & Aviary Birds '…the book covers this fascinating relationship and, although rather more about the domestic relationship than the rural lore of wildbirds, it still covers a lot of ground. …people will find this thoroughly entertaining and informative.' Fatbirder '…he ranges widely across the field of direct human-bird interactions. … I'm sure any reader will find something new.' Natur Cymru '…zips around the world picking up subline and rediculous, sobering and frivolous facts from all its corners. Truly bulging with bird-lore, this makes for an engrossing read for all ornithology enthusiasts'. NHBS Blog

Dr. Smith is a biologist and former Chief Scientist at the Countryside Council for Wales and is currently a Board Member of The Environment Agency. He is a prolific writer on wildlife, environment and travel and has had numerous features published in a variety of magazines and newspapers.