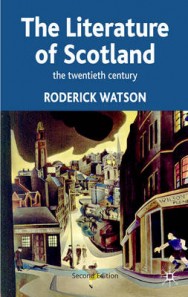 Literature of Scotland: The Twentieth Century

Critics hailed the first edition of The Literature of Scotland as one of the most comprehensive and fascinatingly readable accounts of Scottish literature in all three of the country’s languages – Gaelic, Scots and English. In this extensively revised and expanded new edition, Roderick Watson traces the lives and works of Scottish writers in a beautiful and rugged country that has been divided by political and religious conflict but united, too, by a democratic and egalitarian ideal of nationhood. The Literature of Scotland: The Twentieth Century provides a comprehensive account of the richest ever period in Scottish literary history. From The House with the Green Shutters to Trainspotting and far beyond, this companion volume to The Literature of Scotland: The Middle Ages to the Nineteenth Century gives a critical and historical context to the upsurge of writing in the languages of Scotland. Roderick Watson covers a wide range of modern and contemporary Scottish authors including: MacDiarmid, MacLean, Grassic Gibbon, Gunn, Robert Garioch, Iain Crichton Smith, Alasdair Gray, Edwin Morgan, James Kelman, Irvine Welsh, Alan Warner, A. L.Kennedy, Liz Lochhead, John Burnside, Jackie Kay, Kathleen Jamie and many, many more! Also featuring an extended list of Further Reading and a helpful chronological timeline, this is an indispensable introduction to the great variety of Scottish writing which has emerged since the start of the twentieth century.

Reviews of Literature of Scotland: The Twentieth Century

'An excellent resource.' – Caroline McCracken-Flesher, University of Wyoming, USA 'Clear, lucid and accessible.' – Douglas Gifford, University of Glasgow, UK '…a book of formidable scholarship that can be easily dipped into for specific, sought-after information, yet general reader and specialist alike can read Watson's lucid prose from cover-to-cover with pleasure.' – Scott Lyall, Scottish Studies Review Reviews of the previous edition 'Roderick Watson's The Literature of Scotland is a masterly survey of 600 years of writing in Gaelic, Scots and English. It is accurate in its facts, fair in its judgements, brilliant in its compression and a pleasure to read.' – The Weekend Scotsman 'Roderick Watson has done a notable service to Scottish letters. This is a book which should be in every house in Scotland.' – P. H. Scott, Books in Scotland 'A substantial piece of work, written in a lively, flowing style, which combines clarity with concision. The wealth of detail packed into its less than 500 pages makes it an invaluable addition to the shelves of any scholar wishing to know more about Scotland's long and continuing literary tradition.' – Aonghas MacNeacall, The West Highland Free Press 'An essential reference work.' – James Roberson, Glasgow Herald

RODERICK WATSON is Professor of English at the University of Stirling, UK, and Director of the Stirling Centre for Scottish Studies.