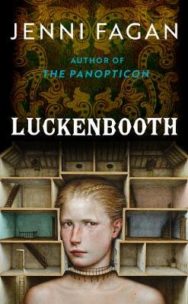 The devil’s daughter rows to Edinburgh in a coffin, to work as maid for the Minister of Culture, a man who lives a dual life. But the real reason she’s there is to bear him and his barren wife a child, the consequences of which curse the tenement building that is their home for a hundred years.As we travel through the nine floors of the building and the next eight decades, the resident’s lives entwine over the ages and in unpredictable ways. Along the way we encounter the city’s most infamous Madam, a seance, a civil rights lawyer, a bone mermaid, a famous Beat poet, a notorious Edinburgh gang, a spy, the literati, artists, thinkers, strippers, the spirit world – until a cosmic agent finally exposes the true horror of the building’s longest kept secret.No. 10 Luckenbooth Close hurtles the reader through personal and global history – eerily reflecting modern life today.

Jenni Fagan was born in Scotland. She graduated from Greenwich University and won a scholarship to the Royal Holloway MFA programme. She is currently completing her PhD at the University of Edinburgh. A published poet and novelist, she has won awards from Creative Scotland, Dewar Arts and Scottish Screen among others, and has twice been nominated for the Pushcart Prize. Jenni was selected as one of Granta’s Best Young British Novelists after the publication of her debut novel, The Panopticon, which was shortlisted for the Desmond Elliott Prize and the James Tait Black Prize. Her adaptation of The Panopticon was staged by the National Theatre of Scotland to great acclaim. The Sunlight Pilgrims, her second novel, was shortlisted for the Royal Society of Literature Encore Award and the Saltire Fiction Book of the Year Award, and saw her win Scottish Author of the Year at the Herald Culture Awards. She lives in Edinburgh with her son.