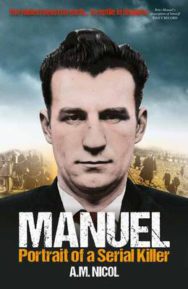 “He was a man who shattered lives, killed without conscience and earned his place in the ranks of those who epitomise terror – the serial killers. Meet Peter Manuel.” DONALD R. FINDLAY QC In a two-year killing spress, Peter Manuel terrorised a city. As the people of Glasgow held their breath and anxxiously awaited news of yet more murders, Peter Manuel killed Anne Kneilands, Marion Watt, her daughter Vivienne and her sister Margaret, Isabelle Cooke and the Smart family – all in cold blood. But why did he do it? What drove him to commit such barbaric crimes? And could the police have caught him sooner? Now, for the first time, MANUEL – Scotland’s First Serial Killer tells the full story from start to finish, from his birth in the USA and his love of gangster movies to his life of crime that would ultimately end on the gallows after one of the most sensational trials in legal history. Revealing new facts about the case and the myths that still surround it, this is the definitive account of one of the most notorious criminals in history – Peter Manuel, serial killer.

Allan M. Nicol studied history and law before qualifying as a solicitor in Scotland in 1980. He worked in private practice in Glasgow before joining the Procurator Fiscal service as a prosecutor in the west of Scotland for twelve years. He was called to the Scottish Bar in 1993, where he continues to practise.