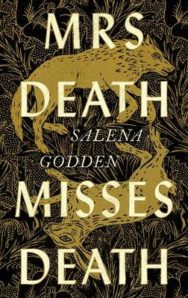 Mrs Death has had enough. She is exhausted from spending eternity doing her job and now she seeks someone to unburden her conscience to. Wolf Willeford, a troubled young writer, is well acquainted with death, but until now hadn’t met Death in person – a black, working-class woman who shape-shifts and does her work unseen.Enthralled by her stories, Wolf becomes Mrs Death’s scribe, and begins to write her memoirs. Using their desk as a vessel and conduit, Wolf travels across time and place with Mrs Death to witness deaths of past and present and discuss what the future holds for humanity. As the two reflect on the losses they have experienced – or, in the case of Mrs Death, facilitated – their friendship grows into a surprising affirmation of hope, resilience and love. All the while, despite her world-weariness, Death must continue to hold humans’ fates in her hands, appearing in our lives when we least expect her . . .

Salena Godden's debut novel is timeless, brave and beautiful. By her open-hearted embrace of Mrs Death, Godden shows that life always flowers among friendship and connections. This is a book for everyone who understands they hang suspended between the click and the bang — JOHN HIGGS Salena Godden's pin-sharp ability to mine the intricacies of human nature fuels her long-awaited debut novel, a life-affirming and unflinching treatise on death and its stark realities. Always playful, infused with her trademark humour and commitment to truth, Godden reinvents the form while staying true to an emotional honesty that's as forthright as it is courageous. Mrs Death's finale is some of the most powerful writing I've read in years. Here is necessary, beautiful work. Thank God for Godden — COURTTIA NEWLAND In this timely and exquisite meditation on breath and its best rhyme, we see a stunning performance poet crowding all the energy, wisdom, passion and laughs of her live work into the solid ingot of this astounding novel, as profound as Cohen, as playful as Brautigan. Salena Goddess, more like — ALAN MOORE A rhythmic and powerful poetic meditation on death, life and love and the hidden mysteries of the universe; both playful and sombre, hilarious and human — NIKESH SHUKLA Exquisite. A daring, poetic offering that establishes Godden as one of our most exciting voices. I loved it — IRENOSEN OKOJIE

Salena Godden is one of Britain’s best loved poets and performers. She is also an activist, broadcaster, memoirist and essayist and is widely anthologised. She has published several volumes of poetry, the latest of which was Pessimism is for Lightweights, and a literary childhood memoir, Springfield Road.Mrs Death Misses Death is her debut novel. A BBC Radio 4 documentary following Godden’s progress on the novel over twelve months was broadcast in 2018.@salenagodden | salenagodden.co.uk