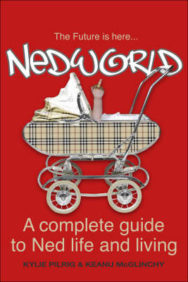 Nedworld: A Complete Guide to Ned Life and Living

A humorous and stylish look at the world of the ned and the rise of ned culture in Scotland The rise of the ned over the past decade has increased sales of sportswear (none of which is ever worn to a gyml), baseball caps, prams, hologram pendants, large gold hoop earrings, knuckle-duster name rings, fortified wine, alcopops and energising sports drinks. It is a growth culture and it is big business…This handy guide includes key features such as ned dating and sex, ned offspring, ned fashion, neds and their cars and accessories, ned houses, ned nights out, ned icons, ned funerals, neds and employment and ned holidays. It also examines what the average ned does all day when not appearing on daytime TV chat shows, dodging DSS investogators, bailiffs and the local loan shark. A section on how the rich ned’s lifestyle comparos to that of the poor ned was planned but, unfortunately, the differences were so slight it had to be cancelled.

Kylie Pilrig left school aged thirteen pregnant with her second child. Since then, she has produced four more bairns – all with different fathers and all named after her fav pop stars, natch! Britney has recently made Kylie a granny for the first time and looks set to follow in her mother’s ned-like footsteps. Darius, however, could well be the black sheep of the family as, at the age of twelve, he can actually spell his name right most of the time. Ex-car-thief Keanu McGlinchy has been a ned since the age of three when his mother found a fake Burberry baseball cap in the close and he’s never looked back – unlike his baseball cap. Fluent in ned speak and well versed in potential fashion faux pas such as forgetting to tuck your trackie bottoms into your Nike trainers, the only problem he had with writing this book was how to explain to his ned mates the concept of being paid to do something.