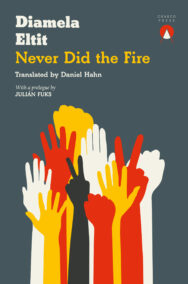 Home > Fiction from Scotland > Translated Fiction > Never Did The Fire

Never Did The Fire

Never Did the Fire unfolds in the humdrum of everyday working class existence, making the afterlife of an agitator that of anyone living next door. For one old couple, brought together years ago in an underground cell, the revolution has ended in a small apartment, a grinding job caring for the bodies of the unwell well-to-do, and all the aches and pains that go with a long life and a long marriage. Untethered from the political action that defined them, and mourning the loss of their child, their bonds dissolve, but the consequences of their former life, and their dependence on each other, won’t let them go.A literary icon in Chile and a major figure in the anti-Pinochet resistance, Diamela Eltit is at the height of her powers in this novel of breakdowns. Never Did the Fire evokes the charged air of Chile’s violent past, and the burdens it carries into the present-day, when the structures we built, and the ones we succumbed to, no longer offer us any comfort or prospect of salvation.

Diamela Eltit is one of Latin America’s most daring writers. During the Pinochet dictatorship, she participated in the collective CADA, staging art actions against the dictatorship, and publishing her first novels to acclaim. She is currently the Distinguished Global Professor of Creative Writing in Spanish at NYU. She lives in Chile and New York.

Translator Daniel Hahn is a writer, editor and translator with over eighty books to his name. His translations (from Portuguese, Spanish and French) include fiction from Europe, Africa and the Americas and non-fiction by writers ranging from Portuguese Nobel laureate José Saramago to Brazilian footballer Pelé. Recent books include the new Oxford Companion to Children’s Literature and a translation of Julián Fuks’ Resistance and Occupation. He is a former chair of the Society of Authors and is presently on the board of a number of organisations that deal with literature, literacy, translation and free expression. In 2021 Daniel was made an OBE for his services to literature.