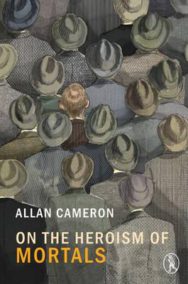 Home > Fiction from Scotland > On the Heroism of Mortals

On the Heroism of Mortals

Opening The Heroism of Mortals is like opening a box of intellectual firecrackers. The stories ricochet between the comically absurd, the minutely observed, the inevitability of heartbreak. Cameron examines tiny details, using his prose as a microscope: simple acts become ominous and complex, entire universes are revealed. The Heroism of Mortals peers into the little details of our lives and studies their chaos and tragedy. A soldier in the red army wants to impress his girlfriend and sparks off a tragic series of events. A couple decide to have a day out and both their lives are changed forever – and a new art movement is born. The gift of a hat demonstrates man’s humanity to man. From living statues to domestic abuse in leafy Kelvinside, this collection is endlessly inventive. Fictions unfold within fictions, stories tumble into one another, lives collide in unpredictable ways and all is executed with wry and dark humour. Cameron is playing, and with dangerous toys: politics, ethics, God, art – and us, the readers.Eclectic, a master of techniques, Cameron writes stories that are laugh-out-loud witty and mischievous but betray, almost despite themselves, warmth and genuine humanity. The Heroism of Mortals is serious, funny, and utterly contemporary, dancing on the faultlines of our modern world and lives.

Allan Cameron was born in 1952 and grew up in Nigeria and Bangladesh. He has written two novels, The Golden Menagerie (Luath Press, 2004), partly based on Apuleius’ The Golden Ass but also a polemic against it, and The Berlusconi Bonus, a political satire principally directed at Western consumerism, the policies of Bush and Blair, and Fukuyama’s now disowned victory song of American capitalism. His non-fiction work, In Praise of the Garrulous, is an examination of the essentiality of language to human nature. The first of two collection of short stories, Can the Gods Cry?, was published in 2011, and this volume is its companion. He does not speak the truth to power, as power never listens or only listens to other power, but he does continue to write the truth about power, as he sees it, and to demonstrate his admiration for the powerless and their prodigious resilience.