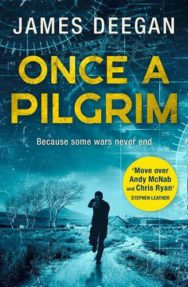 Home > Fiction from Scotland > Adventure/Thriller > Once A Pilgrim

John Carr has recently left the SAS, after a long and distinguished career, and is now working for a Russian oligarch in the murky world of private security.

But an incident from his past – in which three terrorists were brutally killed – suddenly comes back to haunt him.

Tracked by a hitman out for revenge, John Carr is forced to step over the line to defend himself and his family. It’s a cruel and violent world and one he thought he’d left behind.

But some wars never end.

Patriot Games meets Taken: In Once A Pilgrim, John Carr shows all the Reacher-esque hallmarks of a cold-blooded antihero doing what needs to be done, whatever the consequences.

James Deegan MC is a fantastic new voice in the thriller genre, writing with unprecedented authority and authenticity.

James Deegan MC spent five years in the Parachute Regiment, and seventeen years in the SAS. He served for most of that time in a Sabre Squadron, from Trooper to Squadron Sergeant Major, and saw almost continuous service on operations in Northern Ireland, the Balkans, Africa, Iraq, Afghanistan, and elsewhere. He fought in both Gulf Wars, and was on both occasions amongst the first Coalition soldiers to cross the border into Iraq. Twice decorated for gallantry, he retired as an SAS Regimental Sergeant Major. Once A Pilgrim is his first book.