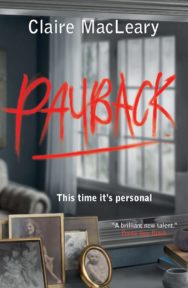 When police are called to a murder scene at the home of Aberdeen socialite Annabel Imray, they find themselves under pressure to get a conviction, and fast. Meanwhile, local PIs Wilma Harcus and Maggie Laird are at rock bottom, desperate for income. As Maggie contemplates replacing Wilma with an unpaid intern, an eccentric widow appoints them to search for her lost cat – and Wilma goes off-piste to negotiate a loan, with terrifying terms. As the fear caused by a series of sinister break-ins escalates, Maggie blames the aggressive language in public discourse for inciting violent crime. But before long, she finds she is in the danger zone herself.

Will Wilma manage to save her?

Payback is the fourth thriller in the Harcus & Laird series.

Claire MacLeary lived for many years in Aberdeen and St Andrews, but describes herself as “a feisty Glaswegian with a full life to draw on”. Following a career in business, she gained an MLitt with Distinction from the University of Dundee and her short stories have been published in various magazines and anthologies. She has appeared at Granite Noir, Noir at the Bar and other literary events.

Claire’s crime series, Harcus & Laird, has been received with wide acclaim. Her debut novel and the first in the series, Cross Purpose, was longlisted for the prestigious McIlvanney Prize, Scottish Crime Book of the Year Award 2017. Burnout was longlisted for the Hearst Big Book Award 2018. Runaway, her third novel, was published in 2019. Payback is Claire’s fourth novel and continues the Harcus & Laird series.