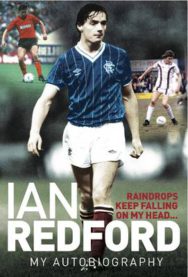 Raindrops Keep Falling on My Head…: My Autobiography

In an era before big money arrived, Ian Redford, the son of a Perthshire farmer, was stigmatised as football’s rich kid. But, in reality, there was no silver spoon. And at an early age, when it was discovered that Redford was completely deaf in one ear, he was advised not to play contact sport of any kind. But this did not deter him from pursuing his dream of being a professional footballer. At the age of 16, Ian Redford’s career took off when he made his debut for Dundee FC and at the age of 19 he broke the Scottish transfer record when he signed for Glasgow Rangers for GBP 210,000. After nearly six years in Glasgow, Redford returned east to play for Dundee United under the notorious Jim McLean, and his career reached new and unexpected heights. Football has been a key part of Ian Redford’s life but behind the success and the goals, his family has been touched by tragedy. When Ian was seven years old, his baby brother contracted leukemia and his death five years later devastated Ian’s family. It was an event the family would never recover from but it also gave the young Ian Redford the motivation to succeed which he channelled into his football.It was the start of his own journey which gave him challenges and opportunities he could never have dreamt of. Insightful, moving and entertaining, Ian Redford’s autobiography is a fascinating read throughout as his journey takes him from rural Perthshire to the biggest football stages and on to, amongst other things, a spell as a FIFA registered players’ agent and brief career as a businessman in Eastern Europe with Sergei Baltacha as they discovered how not to deal with the local Russian mafia.