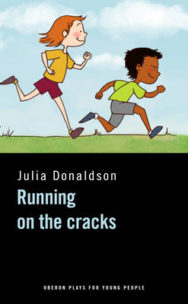 Home > Uncategorized > Running on the Cracks

Running on the Cracks

“Run. Keep running. You’re doing the right thing. Lay low. Head down. Don’t look back. Just keep running. And whatever you do, don’t tread on the cracks…” Leo’s world has been turned upside down. Her parents are gone and her bird-loving uncle is getting too close for comfort. She is only sure of one thing…she must get out. In a desperate bid to find the grandparents she never knew, Leo jumps on a train to Glasgow, penniless and stealing food to survive. A nationwide hunt for her begins. Will she track down her grandparents, or will her uncle get to her first?

Julia Donaldson was born in 1948. She grew up in London and studied Drama and French at Bristol University. She worked for a few years in publishing and as a teacher, while also writing and performing songs and street theatre with her husband Malcolm, and writing and directing two musicals for children. She then combined a career writing songs for children’s television with bringing up a family. In 1993, one of her songs was made into a book, A Squash and a Squeeze. Since then she has written over a hundred books and plays for children and teenagers, including the award-winning rhyming stories The Gruffalo, Room on the Broom, The Snail and the Whale and Zog, all illustrated by Axel Scheffler, which are among the UK’s best-selling picture books. Her novel for teenagers, Running on the Cracks, came out in 2009 and won the Nasen Inclusive Children’s Book Award. For three years she was writer in residence in Easterhouse, helping local children write and act. She is now patron of the charity Artlink Central which engages artists to work in hospitals, prisons and schools.