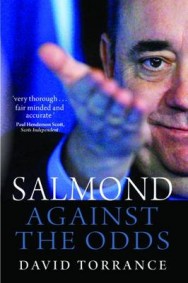 Home > Politics, Current Affairs and Ideas > Salmond: Against the Odds

Salmond: Against the Odds

NEW POST-REFERENDUM EDITION. Alex Salmond is well known in Scotland, the UK and beyond as the leader of the Scottish National Party and Scotland’s First Minister, but relatively little is understood about Salmond as a human being, what makes him a Nationalist, what shaped his political views, and what sort of country he believes an independent Scotland can be. In this first biography, with which close colleagues and friends have co-operated, the acclaimed political biographer David Torrance turns his attention to perhaps one of the most capable and interesting politicians Scotland has produced in the last few decades. Utilising a raft of published and unpublished material, Torrance charts the life and career of Alex Salmond from his schooldays, his political activism at St Andrews University, his early career at the Royal Bank of Scotland, his election as the MP for Banff and Buchan and, in greater depth than ever before, his two spells as leader of the SNP and, from 2007, as First Minister of Scotland.

David Torrance was born and brought up in Edinburgh and educated at Leith Academy, Aberdeen University and Cardiff University’s School of Journalism. He was formerly political reporter for STV and is now a freelance writer, journalist and broadcaster. He lives in London.