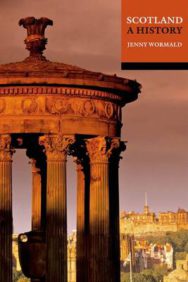 Scotland has long had a romantic appeal which has tended to be focused on a few over-dramatized personalities or events, notably Mary Queen of Scots, Bonnie Prince Charlie, the Highland Clearances – the failures and the sad – though more positively, William Wallace and Robert the Bruce have also got in on the act, because of their heroism in resisting English aggression. This has had its satisfaction, and has certainly been very good for the tourist industry. But, fuelled by the explosion of serious academic studies in the last half-century, there has grown up a keen desire for a better-informed and more satisfying understanding of the Scottish past – and not only in Scotland. The vague use of ‘Britain’ in books and television series which are in fact about England has begun to provoke adverse comment; there is clearly a growing desire for knowledge about the history of the non-English parts of the British Isles and Eire, already well established in Ireland and becoming increasingly obvious in Scotland and Wales.This book brings together a series of studies by well-established scholars of Scottish history, from Roman times until the present day, and makes the fruits of their research accessible to students and the general reader alike. It offers the opportunity to go beyond the old myths, legends, and romance to the much more rewarding knowledge of why Scotland was a remarkably successful, thriving, and important kingdom, of international renown.

Jenny Wormald is an Honorary Fellow in the School of History, Classics and Archaeology at the University of Edinburgh and was previously Fellow and Tutor in Modern History at St Hilda’s College, Oxford. She is the author of numerous publications on early modern Scottish and British history and is the editor of the seventeenth century volume in the Short Oxford History of the British Isles series.