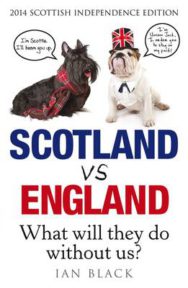 Scotland vs England: Whit Will They Dae Withoot Us?: 2014

On the 18th September 2014, a mere 700-and-a-bit years after the Battle of Bannockburn, the struggle for power between Scotland and England will reach another milestone – this time probably without the swords, horses and armour. It is, without question, the most serious subject of the year, but there is a funny side too. Now Ian Black, master of the witty remark, king of the one-liner and enthusiastic unfurler of the Saltire sets his mind to the lighter side of Independence. With more pro-Independence and anti-No-voter jokes and tales than you can shake a stick at, Scotland vs England is the antidote to a very serious year. This book explains that the new Scots currency will be the Dreichma, perfect if our usual weather combines with Greek-style financial meltdown anytime in the future, or possibly the Punt, though apparently all of the punts are in the south-east of England. Mr Black also explains that occasional mutterings of “durty English bastards” north of the border refer not to the great majority of English folk but to the filthy goings-on in Westminster.And there are answers to some of the great questions, like: “What goes ‘putt’ and what goes ‘putt, putt, putt, putt'”, to which the answer is: a Scottish golfer and an English golfer on the Old Course at St Andrews. Scotland vs England may not help you make up your mind about which way to vote, but in the serious months ahead when all will seem lost and there will be no escape from politicians, it will be very welcome.

Ian Black is an author, humorist, whisky lover and an enthusiastic member of the Tartan Army, a pastime which has endlessly demonstrated the need to keep his chin up and look on the bright side. Ideal preparation for any vote on independence.